The Federal Reserve was already facing a difficult situation due to soaring inflation before Russia's invasion of Ukraine. It is now about to embark on monetary policy normalization, with Treasury-market volatility at its highest level since the outbreak.

When the Federal Reserve delivers its policy statement at 2 p.m. Eastern time on Wednesday, it is anticipated to increase short-term interest rates by a quarter percentage point and offer further details on its plans to decrease its over $8 trillion balance sheet. Its rate hike has already been priced into markets where traders bet on future Fed policy, as have the six additional quarter-point hikes predicted later this year.

However, the Fed's ambitions to tighten monetary policy are not the only source of instability. Russia's invasion of Ukraine spurred a rush by global investors into safe-haven dollar markets, igniting a frenzied rally for Treasury yields. The announcement resulted in the benchmark 10-year yield falling to as low as 1.73 percent.

That surge has since reversed course. The 10-year Treasury yield has risen 40 basis points in less than a week, to 2.14 percent on Tuesday afternoon. 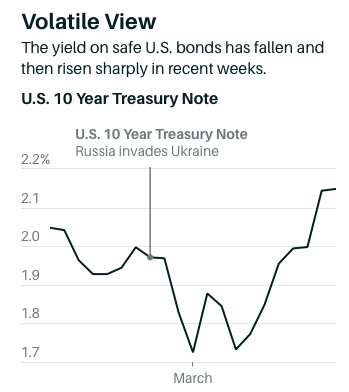 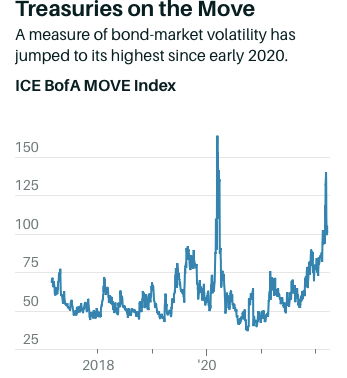 Volatility expectations in the Treasury market have lately risen to their greatest level since the early days of the Covid-19 outbreak, as assessed by option pricing.

There are several ideas circulating to explain the latest selloff, the most obvious of which is that investors' emphasis has shifted back to Fed tightening and inflation.

Because the Fed's policy is being driven by surprisingly sustained inflation — a trend exacerbated by the isolation of Russia and Ukraine, two big participants in global commodities markets — investors are skeptical that the Fed would reverse course even if GDP slows. According to Goldman Sachs, this has resulted in rates markets pricing "stagflation," a state in which inflation is high but growth is slowing.

This helps to explain why equities and bonds are on course to suffer significant losses this quarter, a rather rare scenario for investors who have been monitoring markets since the financial crisis.

"Typically, the negative link between bond and stock returns exists because when profits decline, it is almost always due to the economy contracting, and when the economy contracts, the Fed will cut," said Tom Graff, co-head of fixed income at Brown Advisory. "However, due to inflation, that is not how it will play out."

Additionally, some Wall Street analysts have questioned the impact of unprecedented sanctions on the usage of reserve currencies. Credit Suisse strategist Zoltan Pozsar predicted that US sanctions on Russia will result in "a new world (monetary) order centred on commodity-based currencies in the East, possibly weakening the Eurodollar system and contributing to inflationary forces in the West."

In a March 14 note, Peter Tchir, strategist at Academy Securities, highlighted those worries. "Given what happened to Russia, is it realistic to believe that certain countries, most likely those with interests at odds with ours, are selling Treasury bonds?" I have no proof of it, but it appears to be a valid inquiry," he added. "I'm not trying to sound alarmist, but my degree of anxiety has been steadily increasing."

Whatever the reason for the movements in Treasuries, the market's choppy trading has caused Bank of America analysts to "raise the alarm" on Treasury market liquidity difficulties in a March 8 note.

Bank of America and Barclays have both advocated that the US government might take efforts to increase Treasury market liquidity. They suggested that the Fed may reinvest the principal of mortgage-backed securities in the market for Treasuries. According to Barclays, the Fed might ease certain regulatory restraints on banks.

As a result, investors will be paying close attention to the Fed's news conference today to determine what, if anything, the central bank intends to do about Treasury market liquidity. Chairman Jerome Powell addressed the meeting beginning at 2:30 p.m the 16 of March.

As investors digested the Federal Reserve's recent monetary policy decision, stocks gained Wednesday afternoon. In a move that had been widely anticipated, the central bank raised interest rates for the first time since 2018.

Top 5 Forex CRM Solutions for 2022
Brokerage businesses utilize CRM (Customer Relationship Management) to communicate with their clients and manage their internal workflow. At this level, organizations build customer relationship management systems around their methods and concepts for engaging with traders, resulting in substantial disparities amongst brokers.

The Role of Liquidity Providers in the Brokerage Business

Let's find out what is liquidity and array of trading pairs, what is the role of a liquidity provider and which are the best ones.