Equities in the United States fell sharply on Thursday as investors evaluated another record-high inflation figure and comments by St. Louis Federal Reserve's President James Bullard, who suggested the Fed may be more aggressive than expected and tighten monetary policies amid rising price levels.

The Dow Jones Industrial Average ended a three-day unbeaten run by falling 500 points, or 1.5%, after remarks from Bullard, who expects a 100 basis point interest rate rise by July 1. The S&P 500 fell 1.8%, while the Nasdaq Composite fell 2.1%, pushed down by declines in technology. At the same time, the 10-year Treasury note increased to 2% for the first time since August 2019.

"I normally take St. Louis Federal Reserve President Jim Bullard's comments with a dose of skepticism since he has a track record of constantly changing his predictions," remarked Bleakley Advisory Group CIO Peter Boockvar. "However, it is important to remember that he is going to vote this year, and therefore he is a very crucial figure to watch."

Inflation in the United States surged in January, reaching its highest level since 1982, with prices for a wide variety of products and services rising further amid ongoing scarcities and supply problems. According to Bloomberg statistics, consensus analysts expected a 7.3% increase.

"While inflation kept exceeding the Federal Reserve's goal last month, core inflation factors are beginning to stabilize," Comercia Bank chief economist Bill Adams stated. "Remember that a large portion of the price increase was due to shortages, and the market is making significant progress in alleviating supply problems."

"While inflation is putting a strain on Fed policy choices, our present inflationary climate is unusual and is mostly driven by supply chain disruptions, which the Fed cannot address with tighter monetary policy," Davis stated.

"Even though we see the yield curve starting to flatten, we are keeping an eye on the 10-year, and the CPI," ERShares chief operating officer and chief investment strategist Eva Ados commented, adding that the three key factors in the statistics are costs of labor, food, and energy.

According to Ados, once the 10-year Treasury yields 2%, "it will spark a psychological barrier and increase fear in the market."

The prior trading day's indices were boosted by optimistic company quarterly reports. The Walt Disney Company, a Dow component, reported first-quarter 2022 earnings after market close on Wednesday that far above expectations. Following the news, the media conglomerate's stock rose as much as 9% due to better-than-expected performance for its streaming platform Disney+ and a rebound in amusement park visitations. Uber also reported earnings after the bell, showing quarterly earnings that were above strategist expectations and indicating that headwinds created by the Omicron COVID-19 spike had subsided. "In the previous year, it was all about 'explain to me the storyline and how fantastic it is,'" Satori Fund founder and portfolio manager Dan Niles pointed out. "In 2022, it's all about 'show me the money and show me that you're expanding profitably - that you have cash flow."

After the Fed's surprising adjustment in how hawkish it will tighten monetary policies shook markets last month, investors have sought solace in good profits in recent weeks. According to Bank of America's most recent report, S&P 500 earnings per share have exceeded average estimates by 6% so far in the current quarter and are on course to expand at a pace of well over 20% year-on-year.

However, as the profits period comes to an end, investors will return their focus to macroeconomic issues, with a particular emphasis on Thursday's inflation figure — a 7.5% annual CPI rise, a 40-year high. 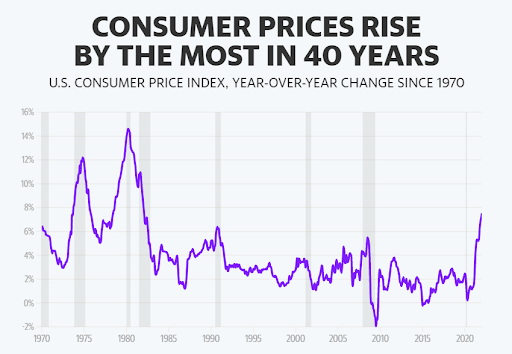 "We believe focusing moves back to the macroeconomic side of the ledger this week," Stuart Kaiser, UBS head of equity derivatives research, said, adding that the European Central Bank and the Bank of England are tightening monetary policies alongside the Federal Reserve, and a bunch of high inflation files is anticipated in the following months. "Considering all of that, we don't believe the rocky trip is finished."

Netflix Raises U.S. Prices, And The Stock Is Up

Think the Federal Reserve Is Already Tightening? Not So Fast

Finally, what is not appreciated is that a true tightening of liquidity in 2022 might result from an outright decrease of the central bank's balance sheet. That is not on the market's radar, but Fed watchers in the know are discussing it.