In economics, the crypto market is a kind of "gray area," i.e., a classic shadow economy, because crypto unequivocally challenges the state monopoly on money issuance. Cryptocurrency is highly volatile, meaning its price depends on many factors and changes quickly. With just a few coins, you can increase your capital or lose it all in a matter of hours. But how to keep money in cryptocurrency and get more confidence that it can be exchanged into fiat at any time, without the risk of losing on the rate? To fulfill this purpose, stablecoins were developed.

Also, there are so-called central bank digital currencies, which were created in response to the cryptocurrency market. This is an attempt to offer a crypto-like product, which in the long term intends to win back a significant share of the market or even completely displace crypto. The CBDC idea got a boost in development and became an obsession for financial authorities under the influence of increasing competition from the actively developing crypto market.

In this article, you will learn what stablecoins and central bank digital currency are today, their similarities and differences, and their future prospects. 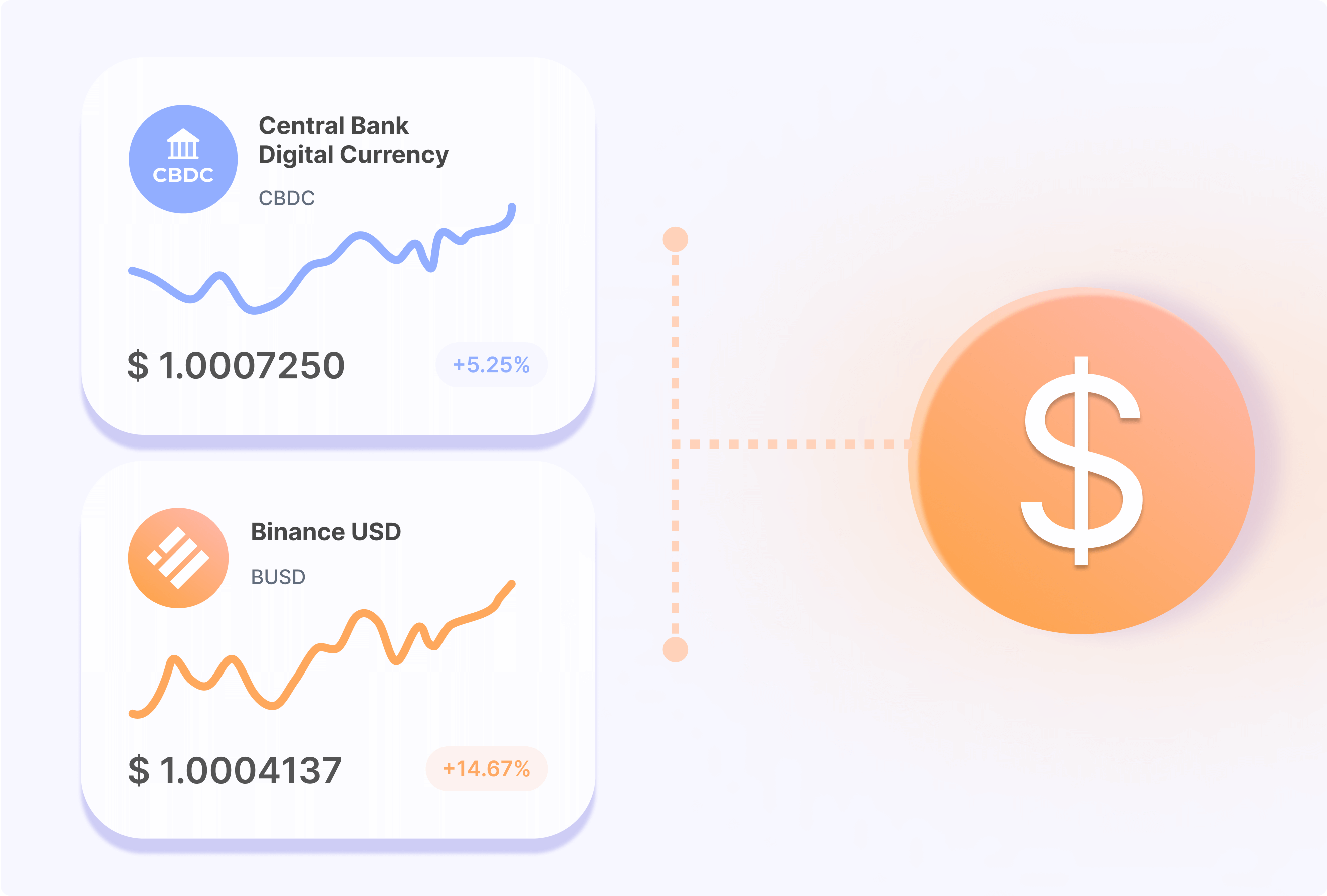 Currently, the trading volume in stablecoins is incredibly high, making it appealing to token holders in a variety of real-world usage scenarios.

For example, many financial institutions nowadays often charge excessive transaction fees when making cross-border transfers or converting one fiat currency into another — with settlements that can take days. Popular stablecoins, on the other hand, allow you to make blockchain transfers instantly and at a much lower cost.

Even some of the world's largest economies are considering launching new stablecoins - often referred to as central bank digital currencies or CBDCs. For financial institutions, including the Bank of China and the Bank of England, blockchain technology is becoming increasingly important in its monetary policy. Many institutions hope that online transactions can provide a much-needed upgrade, especially as smartphone wallets become more popular than bank accounts.

CBDC is the central bank's digital currency, an electronic obligation of the monetary regulator, denominated in the national unit of account and serving as a means of payment, measure, and preservation of value.

CBDC today is a new and immature concept, the very expediency of which is still under debate in the expert community. Many people rightly believe that the development and implementation of CBDCs are extremely premature, especially given the structural crisis that has erupted in the global economy.

Nevertheless, many countries are already at different stages of CBDC implementation. More than a hundred countries are developing, testing, or implementing their own CBDC projects.

There are three CBDC technologies (models) that are used today:

Model FI+. Access to the new currency is organized through a specialized non-banking organization-operator of the system.

Model FI. The model implies that only banks and financial entities can access the new currency.

Model EW. In this model, large industrial enterprises have access to the new currency in addition to banks and financial organizations. Access to the currency of smaller players can be organized through a specialized exchange.

There are other CBDC models/concepts, but to date, there has yet to be a clear favorite among them.

Similarities And Differences Between Stablecoins and Central Bank Digital Currencies 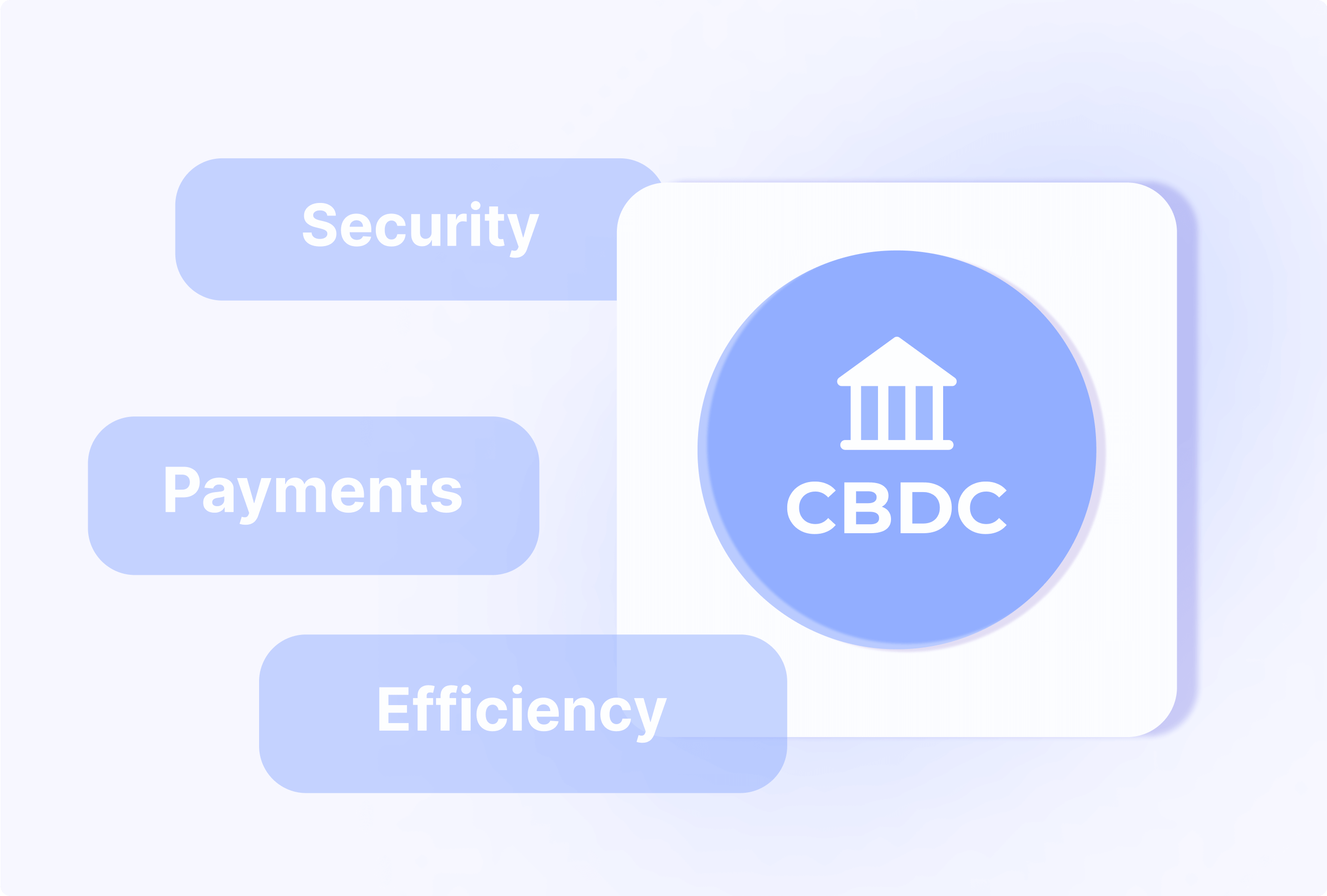 As stablecoins have grown in popularity as an integral part of the crypto market in recent years, creating digital currencies for countries to use has also become a focus. This comes especially as central banks question whether it makes sense to create digital money.

Currently, many people do not have a sufficient understanding of what central bank digital currencies are. At the same time, more and more people are well aware of the possibilities of stablecoins. The general public's interest in stablecoins continues to grow. This trend is especially strong in difficult economic situations when stablecoins help carry out transactions to buy and sell crypto assets. Stablecoins, mostly used as a full analog of paper money in a digital environment for mutual settlements and transfers between users, cannot be used to pay for goods and services outside the crypto space. CBCD, on the other hand, is fundamentally different from stablecoins and can be used for payment purposes and can provide no less efficiency than stablecoins for cross-border transactions while ensuring the safety and security of user funds.

At the same time, organizations that set global standards in the financial sector over the past years have tended to believe that, unlike CBCD, stablecoins have sufficient potential for use in the future. However, in 2021, experts from the Bank for International Settlements concluded that stablecoins could create risks in developing countries. Nevertheless, the Committee on Payments and Market Infrastructures at the Bank for International Settlements and the International Organization of Securities Commissions (IOSCO) continue to work on the development of stablecoin regulation standards.

The Future of Stablecoins and Central Bank Digital Currencies 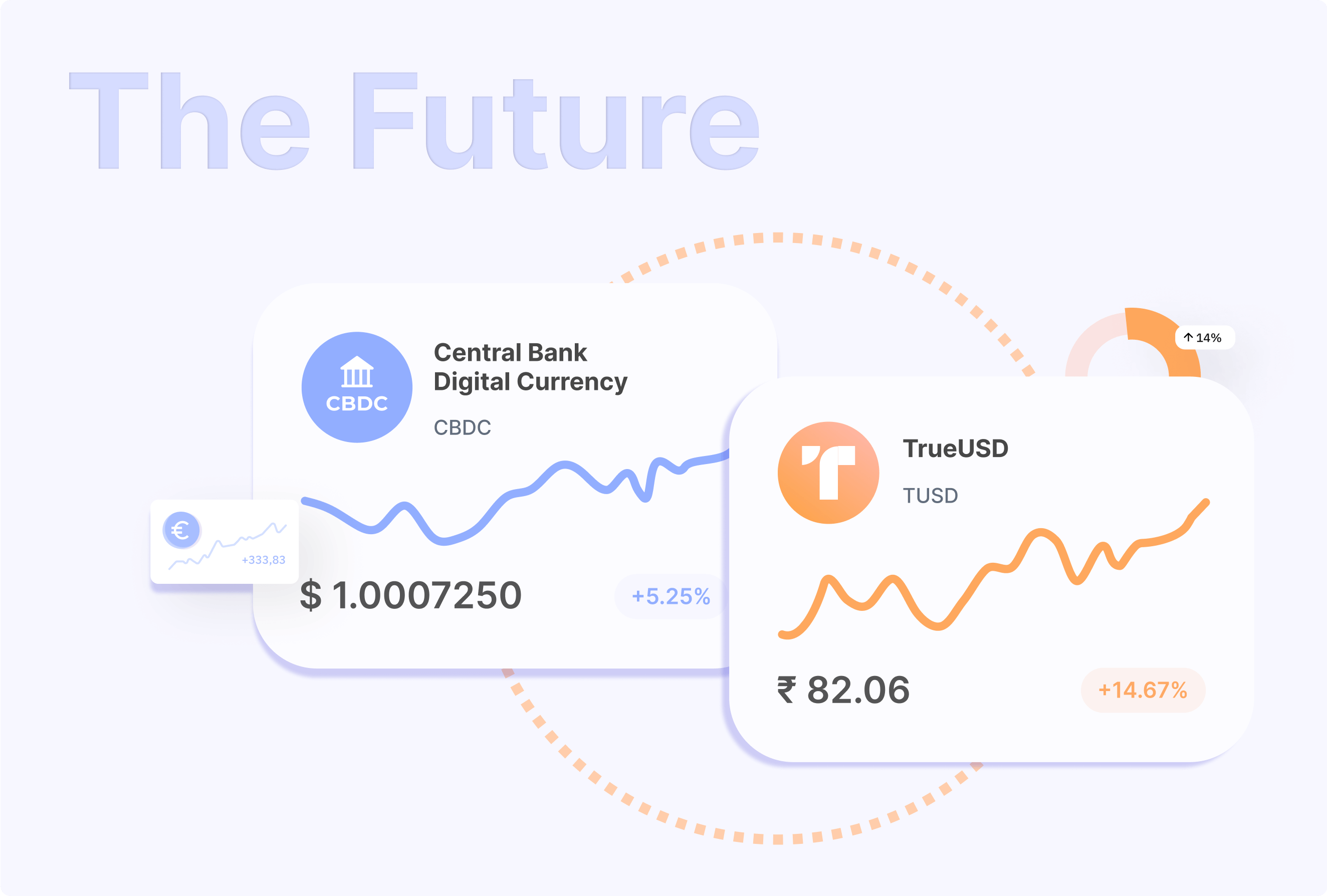 So, in principle, there is no strict need for the creation of CBDC. Nevertheless, the natural desire of states to establish total control over financial systems and financial flows makes them respond to external changes.

The emergence of cryptos and the rapid development of the cryptocurrency industry leave no chance for financial authorities to remain on the sidelines and not react. Therefore, CBDCs, in one form or another, will eventually be implemented everywhere. Given the technology's complexity and the huge implementation risks, the transition to CBDC will be long and gradual. As a result, we will see an increase in the existing trend: there will be more transactional opportunities and less financial freedom.

While CBCD could be the next stage in developing the monetary system in some countries, most investors are also interested in decentralized Stablecoins. Ethereum 2.0 and the tokenization model are expected to be released in 2023, and the DeFi community is waiting for these landmark events. However, others in the DeFi ecosystem are actively working on alternatives. MakerDAO is the most popular option, running on Ethereum with MKR & MCD DAI. However, when it comes to stablecoins, Bitcoin takes its own approach. The Money On Chain ecosystem, based on RSK technology, solves the problem of cryptocurrency volatility and supports Bitcoin-backed Stablecoin, which enables DeFi for Bitcoin.

Therefore, it is safe to say that in the near future, new interesting technologies are expected, as the problem of currency volatility can be solved with both public and decentralized stablecoins, and some central banks are positive about their introduction.

Stablecoins' growing popularity is due to their nature — they unite the world of cryptocurrency, offering instant transactions, payment security, and confidentiality, with the traditional financial system, providing price stability. As of September 2021, public blockchain-based, dollar-linked stablecoins reached $130 billion, with a 500% year-over-year growth rate. The entire volume of stablecoins is now estimated at $180 billion.

Speaking about stablecoins, it is safe to say that the cryptographic security and programmability of stablecoins will not only help to leverage them for the development of the traditional financial system but also foster serious innovation in general.

In the future, stablecoin technologies could have a variety of implementations and drive innovation in several growth areas: more inclusive payment and financial systems, tokenized financial markets and simplified microtransactions for technological advances.

For example, it's possible to create a search engine or streaming video platform supported by near-instant stablecoin micropayments instead of ad revenue and the sale of user data. If this shift in web services takes hold, it will likely lead to further development and growth of stablecoins.

Either way, stablecoins and central bank digital currencies are an extension of blockchain technology, which has overturned the usual idea of what money is. As the technology develops, stablecoins will grow in popularity in equal proportion to the development of other blockchain-based technologies. Also, to control the new cryptocurrency market, states will try their best to offer a worthy alternative that provides the same benefits as stablecoins. 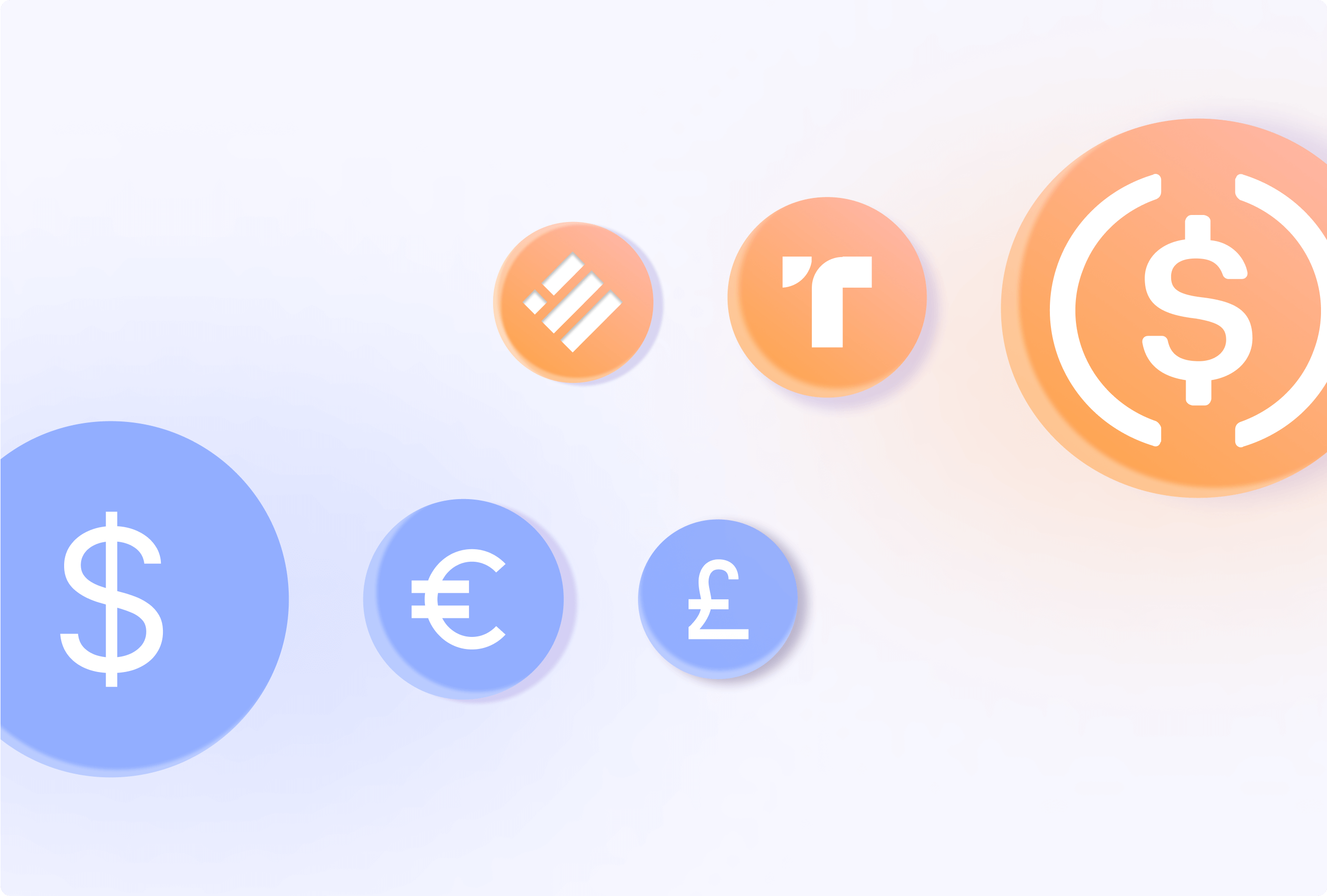 The concept of both stablecoins and digital currencies of central banks has one primary goal — to combine the benefits of the blockchain (transparency, speed, security) with the advantages of fiat currencies (soft volatility, stability, trust, and backing by national economies). Ultimately, in the long term, no one will prevent one of these stablecoins from gaining a place in the sun: starting to be used in everyday payments, for transactions, for worldwide settlements, and becoming a competitor to both Bitcoin and fiat national currencies. A new digital product can borrow the strengths of its predecessors but eliminate their shortcomings.

What is Decentralized Finance?

Let's find out what is DeFi, what are the categories of DeFi projects, Are DeFi projects liquid and the working principle of DeFi liquidity pools.

5 Essential Steps to Starting Your Own Forex Brokerage

An excellent way to get into online trading is to launch a forex broker. But, like with any company, there are a few things to think about before jumping in. This article will show you how to become an FX broker and discuss in detail five essential steps to starting your own forex business.

14-Year-Old American Girl Earned $1 Million From NFTs
Non-fungible tokens continue to make people rich. Abigail is a 14-year-old schoolgirl and artist. The collection of NFT belugies created by Abigail was sold within 10 hours, while the schoolgirl has totally earned more than $1 million in Solana coins.

The cheapest Model 3 in the U.S. is currently $46,990, according to Tesla’s website. The business hiked pricing by 3 percent to 5 percent in both the U.S. and China, Dan Levy, a Credit Suisse analyst, wrote in a letter to clients.