Bank Earnings Are Going To Be Confusing. They Could Be Ugly, Too

For years, bank investors have hoped that the Federal Reserve will initiate a series of hawkish interest hikes. They are finally receiving what they wanted, but it is doubtful that it will benefit the equity markets in the short run.

Earnings season for the large banks kicks out this week, with JPMorgan Chase being the first to report on Wednesday. Strategists are unsure what to anticipate from the industry, given the Fed's vows of forceful actions against rising inflation on the one hand and the situation in Ukraine on the other.

The central bank's decision to raise interest rates should benefit banks' net interest revenue since it increases the difference between what they pay for funds and what they get from loans. However, the recent flip of the yield curve, with short-term debt yields above long-term bond yields, has Wall Street concerned about a recession, which benefits no one.

One thing that Wall Street agrees upon is that earnings will be lower than a year ago due to a robust first quarter of 2021. Capital markets and trade activity have slowed, and investors can't expect banks to release billions of dollars in reserves—money placed aside to cover COVID-19 credit losses that never materialized—to enhance profits. Despite the benefit of increased interest rates, the analysts at S&P Global Markets Intelligence predict that earnings will decline by 8.4% across the sector.

According to Nathan Stovall, chief analyst at S&P Global, the Fed's attempts to battle inflation will raise banks' net interest margins, but mountains of excess liquidity will keep the main indicator from rebounding to pre-pandemic levels over 3.30% until 2026.

Wall Street shares this sentiment. Baird strategists anticipate a disappointing performance from the equities as earnings come in.

"Even though rates have risen in recent weeks, the mood has deteriorated, reflecting overall macroeconomic concerns, the group being crowded, and consensus earlier this year. With the equities being de-risked in recent days, we anticipate the group to trade OK as we progress through reporting," Baird strategist David George said.

Analysts cautioned earlier this year that it was time to be selective regarding banks. While the industry appears to be stable, some banks are better prepared to face today's difficulties than others.

One primary source of concern is the impact of the Russia-Ukraine war on US banks. So far, the real influence seems to be minor since many banks have reduced their contacts with Russia in reaction to sanctions imposed in the aftermath of Russia's takeover of Crimea in 2014. However, a small level of exposure does not equal zero exposure.

And then there are consequences of geopolitical tensions. While banks may not be directly affected by the crisis, their clientele may be feeling pain more in terms of higher costs and other challenges in running their companies. Undoubtedly, Wall Street will be paying special attention as CEOs discuss the macroeconomic picture.

Analysts anticipate a decline in investment banking, notably in equity capital markets, in the first-quarter reports. According to Dealogic data, earnings are down 75% year over year and 61% quarter over quarter. The number of agreements revealed this year had gone down by roughly a third compared to a booming 2021. Transaction backlogs look to be solid, but closing agreements is taking longer because of a more strict regulatory environment. 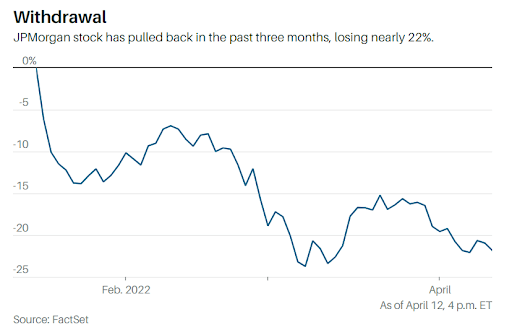 Trading will also prove to be a challenging area. The first quarter was clearly volatile, but it is unclear if it benefitted banks. Nonetheless, gains in currency and commodities trading should outweigh losses in stocks.

According to FactSet figures, the following is what Wall Street anticipates from the large banks:

Bank of America, which reports next Monday and is projected to announce the lowest drop in earnings, is emerging as the Street's pick, with 61% of strategists rating it a Buy. The median price target suggests a 28% increase in the stock. While experts at Keefe, Bruyette & Woods rank the company as Market Perform, they highlight that it is the "safe option" for this quarter owing to lower risks in its capital markets segment and its favorable sensitivity to increased interest rates.

By announcing on Friday that Novi, the digital wallet payments system created in October, will cease on September 1st, Meta has announced a further reduction in its role.

The shares of Tesla are down a little on Wednesday. A story from The Verge said that Tesla had omitted a few important digits from their Cybertruck homepage, which may be the reason. That disclosure, on the other hand, is no longer news.

Exploring the Metaverse: What Does It Mean for the Future of the Internet?
The Internet is that digital world that gives everyone the opportunity to find interesting information, get new business opportunities, make transactions, create your ecosystem in online games, and be whatever you want to be. When it comes to online gaming and interaction with others, the metaverse is prevalent in the news these days. So what is the metaverse? What are some examples of it and how will it affect the internet and business in the future? Let's find out in this article together!