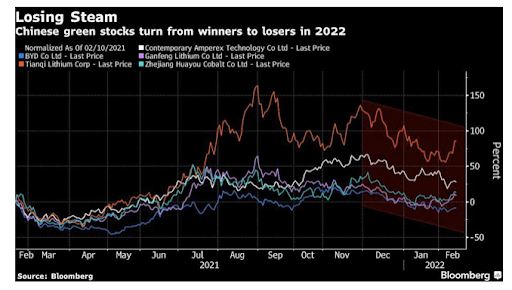 As bets on China's green energy rise turn bad, Asia's best-performing stock funds from last year have plummeted to near the bottom of the heap.

The funds' holdings in China's renewable energy and electric cars, which have taken a pounding after two years of blistering rallies in response to Beijing's carbon neutrality ambitions, are to blame for the underperformance. Despite China's policy easing, global monetary tightening has driven up borrowing prices, spurring a rush out of frothy shares.

According to statistics provided by Bloomberg, the five stock mutual funds that gave investors at least 30% overall gains last year have all lost 6% or more since the start of 2022. Last year's top performer, First State Cinda New Energy Industry Equity Fund, is down 11%, compared to a 4.7 percent average loss among the region's $1 billion-plus peers. "Valuation has more than reflected its near-term development potential," said Bocom International's chief strategist, Hao Hong. According to him, the "mismatch between green goals and the reality of near-term reliance on traditional energy" might indicate that the latter will have greater returns in the short-term perspective.

The possibility of quick Federal Reserve rate rises, along with China's unclear economic forecast, has weighed on Asia's equities markets, which have had a turbulent start to the year. The vulnerability of several well-known Chinese firms has become worst, such as battery behemoth Contemporary Amperex Technology Co., which has been concerning against this backdrop.

CATL has lost more than $57 billion in market value since its December peak and is down 10% this year, despite last week's advances. In comparison, The MSCI regional benchmark has dropped less than 2%, while China's CSI 300 index has dropped almost 6% as well.

In a blog post on Jan. 24, Zheng Zhong, manager of the China AMC Energy Innovation Equity Fund, which has lost over 6% this year, wrote, "At this moment, investors should limit their expectations on short-term returns of new energy shares." For the time being, he noted, it's "quite plausible" that they won't outperform the indexes.

For the sake of this report, all five asset managers declined to comment on their results.

Meanwhile, equities funds that have performed well this year are those focusing on Japan's cyclical-heavy market, consistent with a movement away from costly names and toward value companies. Total gains on the MAN GLG Japan CoreAlpha Equity fund and the Arcus Japan Fund exceeded 8%.

In the long run, China's goal of achieving net-zero carbon emissions by 2060 in what is already the world's largest renewables market implies the sector has a lot of potential to expand. However, China's severe energy shortfall last year highlights the difficult balancing act that policymakers must strike between reaching green goals and avoiding setbacks.

As stock values fall and the government continues to roll out efforts to fulfill its climate targets, things for China's new energy funds should start to look bright later this year.

CATL is presently selling at 52 times projected earnings projections, down from a high of 128 times, while Eve Energy is at 33 times. The market value of Ganfeng Lithium Co. has fallen to 28 times or nearly one-fifth of its previous high.

Green-transition initiatives unveiled thus far may be less thrilling than the market had anticipated "in terms of timeliness and strength," according to the report. Policy tailwinds from the National People's Congress and the Chinese People's Political Consultative Conference sessions in March might be "catalysts to monitor," according to Evan Li, an analyst at HSBC Holdings Plc.

Small Growth Stocks Are On Sale. 3 That Are Worth A Look

Shares of some of the most rapidly growing small-caps have recently plummeted as investors are concerned about shifts in the Federal Reserve's monetary policies. Now is an excellent time to acquire them cheaply, If recent history is any indication.

What Is Happening in the Stock Market Today