Bitcoin Analysis, The Next Target Is $77K

The news about the spread of the Omicron strain of COVID-19 hit markets around the world on November 26, including the cryptocurrency market. Meanwhile, the previous market crusher, the Delta variant, which now accounts for the biggest percentage of COVID-19 cases, is still widespread and not fully understood. Not only does the Delta variant have two extra mutations, but the threat of the new possibly aggressive COVID-19 strain has also emerged.

When the efficacy of the current vaccines against a new variant is questioned, concerns are rapidly growing as Omicron spreads around the world. Japan has already put limitations on foreign visitors for one month. Other countries most affected by the virus are ready to follow. If the new strain is proven to be immune to the existing vaccines, we may be able to return to a softer version of the early 2020 worldwide lockdowns.

However, the FED is worried about the spread of the new variant, and the road to economic recovery for the Federal Reserve remains "uncertain" once again. As Fed Chairman Powell stated, the recent surge in COVID-19 cases, as well as the emergence of the Omicron form, represent adverse risks to employment and economic activity, as well as increasing inflation uncertainty.

The Federal Reserve is likely to revise its recovery strategy and some changes are likely to take place in the previously predicted time frame. Markets, meanwhile, may focus on risk hedging assets such as gold and Bitcoin. Since the pandemic, Bitcoin has proven to be the best return on investment, so now may be the greatest moment for Bitcoin's new rise.

Ever since Bitcoin's price has been changing due to the emergencies of the new strains. The price is not only dependent on new variants’ emergencies but also the fears and actions of the countries.

For example, the first four forms had the greatest effect since the world was in lockdowns and the situation was catastrophic.

The Delta strain was found in April 2021, limitations were softer, and there were additional reasons that led to the drop in BTC. When the Delta variant was identified, the world's central bankers argued that the economic recovery was predictable and manageable. But now Omicron is changing things up as the uncertainty has returned.

If strict restrictions are implemented, the crypto market will see extreme volatility and an upward trend. The coins of the Metaverse projects will be one of the most popular coins on the cryptocurrency market, but Bitcoin will set the pace. One of the key indicators used by cryptocurrency investors is Bitcoin's Fear & Greed index. 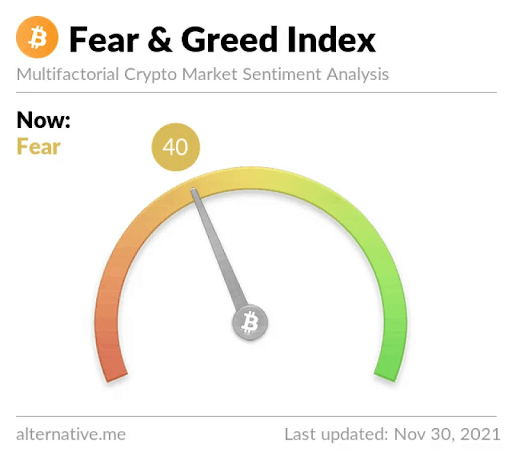 Since the previous week, the cryptocurrency market has been fearful. The fear indicator is mostly interpreted by professional crypto traders as a buy signal.

The daily BTCUSD chart indicates that BTC's upswing will continue in the near future. Based on reaching the Fibo 0.5 level, the November 10 correction appears to be concluding shortly.

The combination of wave 3 followed by a pullback comparable to the present one points to $77K as the next objective for Bitcoin. On a daily BTCUSD chart, the MACD and RSI indexes are quite optimistic. MACD has risen and is ready to cross the signal line, while RSI is at its lowest level of support.

To maintain the rally, Bitcoin needs to close above this dynamic resistance, as seen in the 4H BTCUSD graph below.

Because the RSI is near to the overbought level, this 4H chart shows that Bitcoin is on the verge of a minor local correction before a probable upswing. Bitcoin's next bullish rise will be confirmed when BTC breaks and closes above this dynamic barrier. Before the following move, a retest of local support at $55800 is also probable.

The Nasdaq has been exceptionally dynamic this year, with Tuesday being the 39th consecutive day with a gain of at least 1%. Since the first quarter of 2009, that has been the most of that kind of move in a quarter.

We wouldn't exaggerate if we said that blockchain technology ranks among the most praised technologies of today.