Globant Plans Acquisitions to Boost Push Into Asia and Europe

Globant SA, Argentina's technology heavyweight, wants to expand further with mergers that provide it entry into new markets and access to innovations, as the CEO of the corporation stated after the acquisition of one of Uruguay's largest IT companies.

In an interview, Martin Migoya revealed that the firm intends to expand further in Asia and Europe. The acquisition of GeneXus SA, one of Uruguay's oldest IT firms, is part of Globant's aim to expedite software development by investing in AI technologies. It will also expand Globant's presence in Asia since the Uruguayan firm has one-third of its customers in Japan, according to Migoya.

Globant, headquartered in Buenos Aires, builds software and creates solutions for world-renowned corporations such as Google, Electronic Arts, and Banco Santander. The firm is searching for purchases that would either help it develop in key markets or expand its business into new sectors.

"Our acquisitions are highly selective," Migoya pointed out. "They're not about volume since, in comparison to our income, most numbers seem modest. However, we think about the impact in terms of increasing contacts with other customers."

Globant achieved $1 billion in yearly revenue for the first time in the previous year, and the company anticipates revenues to increase by 70% in 2022. GeneXus, on the other hand, is expected to generate $30 million in revenue this year. Migoya refuses to reveal the acquisition price of GeneXus.

The business is exploring prospective targets in the areas such as metaverses, games, cryptocurrencies, and artificial intelligence, although these may change. The corporation has also undertaken purchases in the cryptocurrency sector, including the acquisition of blockchain company Atix Labs Srl last October. 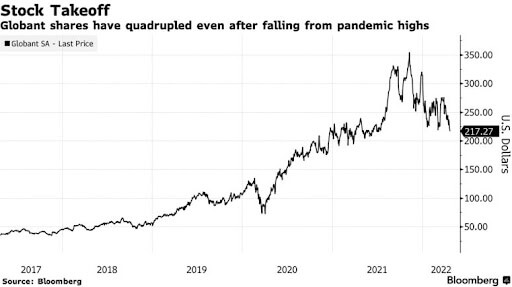 "Crypto is one of the most significant upheavals we've witnessed since the Internet's inception," Migoya added. "It represents a fundamental shift in how the world stores and measures value. Personally, I believe it is one of the world's greatest investment vehicles."

Migoya identified initiatives connected to the metaverse or digital transformation processes, which gained traction during the coronavirus outbreak, as showing the highest income potential.

Other major takeaways from the interview:

Globant, according to Migoya, allows staff to work remotely indefinitely while simultaneously investing in workplaces globally for people who want to work from the office.

The firm has divisions in 18 countries, and on Thursday, it revealed the opening of a new office in Santiago, as well as a commitment to invest $40 million there over the next three years.

He said that the Ukrainian crisis had not impacted business notably. However, the corporation is assisting staff in Belarus and helping with the relocation.

He said that a data leak in March had a minor impact on the organization.

Kevin Sneader, a former McKinsey executive, has been appointed as Goldman Sachs' co-president for Asia-Pacific.

Semiconductor Sales To Russia Banned, But That Shouldn’t Hurt Intel, AMD, And Other Chip Makers

Analysts, though, were not concerned, with Bernstein analyst Stacy Rasgon noting that Russia is a "de minimis direct customer of semiconductors by itself," citing a Semiconductor Industry Association report.