Why Biotech Stocks Are Soaring: These 10 Stocks are to Blame

Following a long and harsh winter, biotech stocks are on fire this summer.

From its peak in early February 2021 through June 14 of this year, the SPDR S&P Biotech exchange-traded fund, which monitors the biotech industry, dropped 63.6%. Since then, the sector has been on the mend, with the XBI up 45.1%.

The XBI's price remains significantly below where it began the year, not to mention its February 2021 peak. It is now trading in the $90 level, but it finished 2021 at $110 per share and peaked at more than $170 per share. Still, the $90 price range is significantly above the XBI's May lows of approximately $60 per share.

Nothing fundamental has changed in the biotech industry in the last few months. What has changed is the news: things have been looking good for biotechs, as certain closely watched drug trials have provided favorable results, and M&A activity has increased.

While some of the largest movers have featured prominently in analyst commentary and media coverage of the biotech rally, the stock activity hasn't been restricted to just a few names in the industry. We conducted a screen to search for under-the-radar movers driving the sector's bull run to dive into which businesses have been driving the surge in biotech stock prices.

We searched the XBI and another ETF that tracks the sector, the iShares Biotechnology ETF (IBB), for the ten equities that rose the highest between the closure of the market on June 14 and the end of the market on August 15.

To focus on the most significant movers, we narrowed our search to firms having a market capitalization of more than $3 billion.

Some of the names that made it through the screening process are no surprise: Global Blood Therapeutics has risen 200% after Pfizer announced a $5.4 billion purchase transaction in early August. Chemocentryx is up 117.4% after Amgen agreed to pay $3.7 billion for the firm. 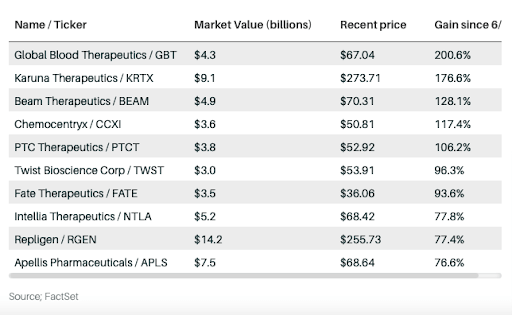 Other biotech stocks that have witnessed significant gains in recent months, on the other hand, have not been the subject of company-altering news articles. Consider Repligen, which manufactures instruments used in the production of complex pharmaceuticals. Its stock has risen 77.4% since mid-June, boosted by confidence in the larger bioprocessing business, which has boosted the stock of firms such as Danaher, but not by any news event.

Following an unexpectedly favorable outcome in a study of their schizophrenia therapy KarXT, Karuna is up 176.6%. Beam Therapeutics, a gene-editing company, is up 128.1%, while PTC Therapeutics, which obtained approval from EU authorities in late July for its gene therapy Upstaza, which treats aromatic L-amino acid decarboxylase deficiency, is up 106.2%.

Barclays announced on Friday that its US subsidiary will purchase a $3.8 billion credit card portfolio co-branded with retailer The Gap Inc.

Is China’s Digital Yuan The Death Knell For Crypto?

The People's Bank of China, the country's central bank, has declared that all crypto-currency transactions are illegal, thus prohibiting the use of digital coins.