Bitcoin believers can take a deep breath. They must convince themselves that their wildest forecasts are likely to come true.

The price of the most popular cryptocurrency has been rising for many days, breaking the see-saw momentum witnessed since the collapse of the FTX cryptocurrency exchange on November 11.

According to monitoring firm CoinGecko, Bitcoin (BTC) prices were hovering at $20,749.71 at the time of the last check.

They have increased by 22% in the previous seven days. On January 13, BTC values surpassed the significant $21,000 mark. They hadn't surpassed this figure since November 5.

BTC's current upward trend has been praised by billionaire Michael Saylor, one of the digital asset's most enthusiastic advocates. Saylor's software firm, MicroStrategy, is one of the few multinational corporations that has made significant investments in Bitcoin.

On January 14, Saylor stated on Twitter that Bitcoin is the best strategy. And as we can see, he was right. 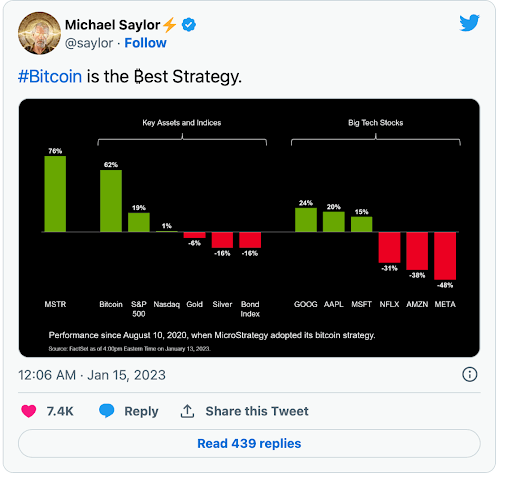 The euphoria around Bitcoin is because investors are reassured by recent inflation statistics suggesting that the Federal Reserve will be less aggressive in raising interest rates.

Thus, this potential inflection point would prevent a prolonged recession, which would be especially bad for risky assets like cryptocurrencies. Therefore, investors prefer to ignore concerns about the FTX bankruptcy, which still lingers in the cryptocurrency market.

Nigel Green, CEO, and creator of Fintech deVere Group, stated that while he and his colleagues are technically still in a bear market, evidence indicates that the bulls are regaining power. The relief rally began on the heels of the latest inflation data from the United States, which was announced on Thursday. It indicated that the CPI in the United States fell to 6.5% in December, down from 7.1% the previous month. As inflation in the world's largest economy appears to be under control as a result of the Federal Reserve's aggressive interest rate rises, it becomes more probable that the central bank will begin to let off the accelerator of the economy by reducing the hike.

The Bureau of Labor Statistics said on Jan. 12 that US inflation fell in December and decreased for the sixth consecutive month, adding to the argument for the Fed to ease policy in the coming months.

The main consumer price index was projected to have climbed 6.5% year on year in December, down from 7.1% in November and broadly in line with the Street consensus expectation.

According to the data, core inflation, which excludes volatile components such as food and energy costs, rose 0.3% month-over-month and 5.7% year-over-year, with both the annual and monthly numbers matching Wall Street forecasts. These inflation numbers will likely inspire investors to take a little more risk by betting on asset classes that are mostly long-term bets.

Bitcoin is pulling the entire cryptocurrency industry with it. Bitcoin itself has surpassed $1 trillion, though it's a long way from the historical record of $3 trillion set in November 2021.

Green stated that the "crypto winter" is thawing as inflation indicators begin to decrease. Of course, the crypto market will not move in a straight line - no market ever does - but they (he and his colleagues) anticipate the bears to go into hibernation and the bulls to run.

While optimism appears to have returned, cryptocurrency values remain far from the highs achieved during the crypto frenzy at the end of 2021. BTC prices had then increased to $69,044.77, while ETH prices had grown to $4,878.26. Dogecoin (DOGE) and Shiba Inu (SHIB) prices have risen 17.4% and 20%, respectively, in the last seven days.

These Are the Best Stocks for When Interest Rates Rise

"As financial conditions tighten, they act as a tailwind for earnings quality," stated Dennis DeBusschere, founder of 22VResearch. Simply buy these companies before investors bid them up in price.

Advanced Markets Has Expanded Its Partnership With Centroid Solutions

The cooperation will provide FX brokers, traders, and asset managers with world-class solutions as well as tools to succeed in today's highly competitive and dynamic market.

What is a Crypto Payment Gateway?

Modern blockchain technology is about to transform major industries such as healthcare, retail, supply chains, and many more. Most importantly, it is quickly gaining traction in payment methods.