One of the country's hottest online trends in recent years has been halted by China's richest tech giants and financiers: community buying, in which technology companies facilitate the traditional practice when neighbors pool their resources to buy inexpensively in bulk. It is another cautionary tale about how quickly a shift in Beijing's attitudes can lead to the collapse of a thriving industry. Already hundreds of startups have gone bankrupt, and investors have lost billions of dollars.

Community buying started as a rural phenomenon, where farmers banded together to purchase supplies in bulk to save money. Recently, it has become more urbanized, facilitated by smartphone technologies, and used primarily for grocery shopping rather than seeds and fertilizer. The use of platforms such as JD.com, Meituan, and Pinduoduo by tens of thousands of neighborhoods seemed to be a revolution in e-commerce.

Demand, however, was unable to keep up with the intense competition. Additionally, the industry has been impacted by President Xi Jinping's massive crackdown on China's internet giants. The government fined several community-buying platforms last year for excessive spending on promotions.

Beijing, Shanghai, and other cities faced lockdowns during COVID, which should have resulted in a windfall for the platforms. Nonetheless, disruptions in their logistics networks compromised their ability to meet demand. Now even the largest companies have been forced to cut expenses. Sherri He, managing director of Kearney in Greater China, says the sector has been a roller coaster because of the pandemic.

After a surge of https://liquidity-provider.com/news/zero-covid-is-breaking-china-liquidity-provider-news/ cases in April, Meituan halted its community-buying operations in Beijing. As a result of this, hundreds if not thousands of pickup points in the city have been closed. There was no indication when the service may reopen from a Meituan representative. 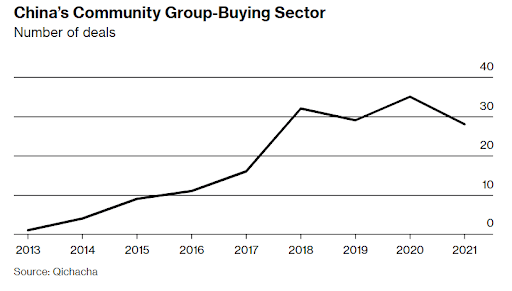 According to a person familiar with the matter and who requested anonymity because the information was private, JD.com, one of the country's biggest e-commerce companies, has slashed its Jingxi community-buying unit workforce by 10% to 15%. The community-buying arm of Didi Global Inc. was hit the hardest by a 20% cut in staff. Alibaba Group Holding Ltd. reduced promotions and decreased expenses as well. Responses to requests for comment were not received from JD.com, Didi, or Alibaba.

The industry experienced a stunning expansion before its contraction. Early in the pandemic, online community-buying startups seemed a sure bet, as locals in smaller towns ordered their daily necessities in bulk online. Many investors followed, including live streaming company Joyy Inc., which invested $100 million in community-buying company Tongcheng Life, hailing the company as a "brilliant example" of how the internet can increase efficiency. Investing in the sector has grown sixfold in three years, to 57.7 billion yuan ($8.7 billion) in 2021, according to Qichacha, the site that searches corporate registries. India and other countries began to adopt similar business models.

To stimulate the markets, China's large technology companies burned through cash to acquire new customers. These firms, which were unable to compete, collapsed. According to Wang Shouren, the founder of community-buying startup Youjing Youtian in Zhengzhou in central China's Henan province, more than 80% of the 1,500 community-buying businesses in the sector in September 2020 had closed six months later.

Bruno Lannes, a partner at Bain's consumer products and retail practice, says top companies also snatched up most of the investment capital, squeezing out smaller firms. "Many businesses struggled with tough regulations and an unstable business model and finally were forced to shut down."

Although there is little reliable data on this nascent market, there were already signs of slowing growth in the sector by the end of 2021. According to a Bain report, the total value of items sold through community-buying shopping sites reached 54.8 billion yuan in the three months prior to last June but then dropped by 12% to 48.3 billion yuan in the following quarter.

One of the sector's first large bankruptcy proceedings took place that summer when Tongcheng Life filed for bankruptcy after raising over $300 million from investors. A week before the company declared bankruptcy, its founder and chief executive officer, He Pengyu, wrote a letter to staff, suppliers, and investors warning that the community-buying industry was experiencing a sudden shift from an epoch of innovation and operational excellence to a race of subsidies and capital. Shixianghui, a company backed by Tencent, also announced its bankruptcy around the same time.

The scale of this industry's collapse is similar to the China bike-sharing industry's collapse five years ago when over ten million bicycles piled up in landfills after startups worth billions went bankrupt. For community buying, the rate of growth failed to match expectations, as it did for bike-sharing. However, this industry is unique because there is a significant demand for its services, especially in smaller cities, since the current pandemic is causing commerce to flourish online at an unprecedented rate.

One of the few startups in China to survive and be profitable is Youjing Youtian. A marketing campaign by the big tech companies has helped spread the community buying concept, says Wang at Youjing Youtian. "Meituan, for example, is actually one of our allies. They use money as bombs in an attempt to penetrate markets while we follow them up with more sophisticated operations."

As part of the community-selling phenomenon, tuan zhang has arisen, a term for a neighborhood representative who helps distribute goods as they're ordered. Today, people such as 28-year-old Xiang Meiling have been abandoning community-buying forums in droves as shrinking demand hit their livelihoods. During the first three months of last year, she received about 20 orders per day on Meituan Select, and in March, she only received two or three orders for the whole month. As a bulk purchaser, she collected commissions of about 1,500 yuan per month from a group of 150 people in a small town in Hubei province, which increased her income by almost 40%. One single mother, a nurse at a local hospital, did not feel it was the right time to continue this business after commissions dropped to 100-200 yuan. "Most people buy only on the days when they receive their paychecks," she explains. "It isn't worth the time."

Rivian, Robinhood, Bumble: How Some Of 2021’s Biggest IPOs Are Faring

The largest IPOs of 2021 and 2020, as assessed by the amount of money collected, demonstrate that stocks of the top five IPOs of last year performed worse than those of the largest IPOs to go public in 2020.

Barclays announced on Friday that its US subsidiary will purchase a $3.8 billion credit card portfolio co-branded with retailer The Gap Inc.

Let's find out what are the main characteristics of the best liquidity providers and which 5 of them are be the best in 2021.