Ethereum In 2022: What Is Money In The Metaverse?

Ethereum is a smart-contract blockchain that promises to create a safe, open environment for hosting apps of any kind. Over the last year, decentralized finance (DeFi) and non-fungible tokens (NFT) have entered the scene to demonstrate to the globe the potential that blockchain innovations can provide. However, scaling technologies that can improve performance as a reaction to changing processing needs are beginning to uncover Ethereum's enormous potential, and its creator Vitalik Buterin aims to decentralize social networks, games, governing, and other sectors.

At the beginning, Ethereum has mostly been used as a platform for trading and lending crypto assets (Uniswap and Aave), as well as a platform for purchasing and selling digital art (OpenSea). Second-layer platforms developed on top of Ethereum, such as Arbitrum and Optimism, as well as innovative approaches such as ZK rollups, will reduce transaction cost and bring Ethereum up to decentralized social media networks like Reddit.

The necessity for consumers to hold and spend Ethereum's asset, ether, will be a constant motif across all use cases.

Ether is the key to releasing blockspace on the Ethereum network, whether that be through the deployment of new apps, leveraging existing current applications, or the transfer of tokens between wallets. What gasoline is to a car, the native asset is to the network. Since the release of EIP 1559, consumers of the blockspace have been buying and burning this asset to engage in the digital economy. Soon, ether will be used to stake and safeguard the network.

As a result of its utility as a fuel, ether has grown into a unit of account and the most prevalent pair on decentralized exchanges (DEX).

Money in the metaverse

If Ethereum, other base-level protocols (for example Solana and Avalanche), and "the metaverse" succeed, money’s meaning will go far beyond its current currency restrictions. Protocols are already making cash, and investors are valuing their holdings in relation to ether rather than dollars or even stablecoins (tokens whose value is based on a fiat currency). The usage of ether as money, though, does not invalidate fiat, stablecoins, or other repositories of value. This is just an addition that has the potential to become the metaverse's money.

Cryptocurrencies, like Ethereum, are still much more demand-sensitive than stablecoins and dollars, which makes them a more efficient investment than currencies (for now). However, the bigger the Ethereum network expands, the more currency ether improves.

Speculators now outnumber genuine blockchain users, but this is going to be changed soon because of a growing ecosystem that allows ether to be utilized for DeFi, NFTs, validation, social networks, and other purposes. Indeed, in Coinbase's Q3 financial report, the business stated that it has observed a significant turn toward blockchain-driven people by withdrawing its tokens from exchanges.

The graph below demonstrates how on-chain customers have increased with new Coinbase accounts, indicating that customers are truly willing to interact with Ethereum apps. A lower-priced option to the Ethereum mainnet, or live version, has grown in popularity, with Polygon surpassing mainnet in active users in one day in early October. Furthermore, Arbitrum has 275,000 consumers who are seeking cheaper ways to interact with the blockchain. 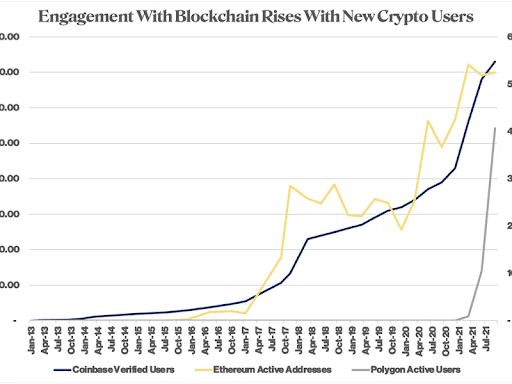 Tokenization of assets and interoperability with DeFi apps are only getting started in creating open, tradable marketplaces for formerly illiquid assets. Assets that may be exchanged against each other, used as collateral, or instantly delivered to any part of the world begin to act much more like money than assets or vaults of value.

As Julien Bouteloup, founder of Stake Capital and key developer at decentralized exchange Curve, pointed out, the Web 3 staff is eager to be compensated in token equity instead of stablecoins. While this might be a result of the bullish trend and growing values, workers are most certainly truly interested in owning the projects they are working on.

What’s next for the value of ether?

Play-to-earn games are most likely in their early stages, but Ronin-based NFT game Axie Infinity is now generating billions of dollars in yearly revenue. Users all across the globe rely on gaming money to make ends meet, with income accounting for a sizable portion of the Philippines' GDP. The link between gaming and finances is becoming increasingly evident, showing only one element of a more digitalized society.

If current trends continue, the globe will become more financially secure than ever before. It's too soon to know if this will be a net win for society, but crypto and DeFi have provided a look into the benefits and drawbacks of tokenization.

Airdrops and stock distribution (when done right) have historically distributed money considerably more freely and equally than big companies. However, the downside is also true, as frauds and exploitation demonstrate how greed may be amplified by tokenization and the anonymous economy.

For better or worse, the notion of money will get murkier as the digital economy expands, as happened with the introduction of credit cards and online payments and the shift away from physical money. This fits wonderfully with the metaverse's theme, in which the border between the digital world and reality gets more blurred.

November Consumer Price Index: What to Know This Week

Investors will be looking for information on the Omicron strain and inflation this week. Last week, market volatility was fueled by concerns about each of these causes.

"The best business to hold is one that can deploy significant amounts of incremental capital at extremely high rates of return over an extended period of time,” remarked Warren Buffett.