Netflix Stock Had Its Worst Day in Nearly 2 Decades. What Wall Street Is Saying

"The loss in subscribers, along with projection for an even bigger decline, is likely to keep optimists away unless there is some sign that the number of subscribers will rise again," Wedbush analyst Michael Pachter said.

Pachter kept his Neutral rating on the company but reduced his price target from $342 to $280. Due to slower subscriber growth, the price target represents a more modest growth of $600 million per year, compared to his previous expectation of $1 billion yearly growth.

Netflix cited a number of reasons for its poor results, including macroeconomic headwinds, the Ukraine crisis, account-sharing, increasing competition and market saturation in North America and Canada.

"It amounts to a 1% decline in subscriptions over a two-quarter period, but it illustrates one of the trends we've been pointing out: penetration is a headwind in established markets, and content does not drive the same engagement in core markets or in new markets," KeyBanc Capital Markets analyst Justin Patterson commented. Patterson rates the company as Sector Weight but does not have a price target.

Netflix intends to keep investing in content and monetize account sharing to address weak growth. According to the corporation, in addition to the 222 million paying households, there are 100 million utilizing shared accounts.

In a research note, Benchmark analyst Matthew Harrigan expressed skepticism that tightening down on password sharing would be a growth game-changer, notably as it probably annihilates full-ride subscriber growth. He predicted that tightening down on passwords may result in a little less than a 6% increase in revenue, without including the negative impact on cash-strapped clients canceling subscriptions in an inflationary economy. Harrigan rates the company as a Hold. 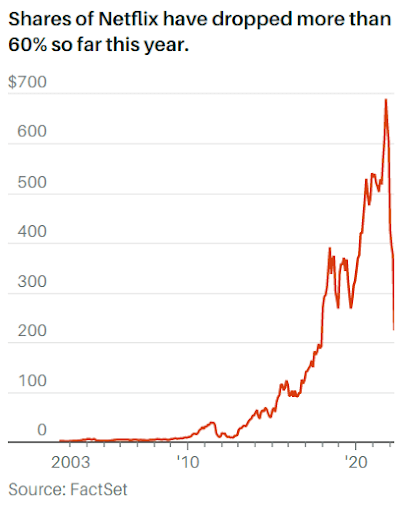 Given the success of competitors such as Hulu, an ad-supported membership tier might benefit the company, as Raymond James analyst Andrew Marok noted.

In contrast, Harrigan was less certain, saying he didn't think "that Netflix's scripted shows, especially when viewed in binge-mode, are conducive to toleration of advertising."

Marok is worried about the persistent instability around consumer demands and the impact this may have on revenue growth in the near term. The analyst kept a Market Perform rating on the company but reduced his yearly revenue estimates for 2022 and 2023 by 3.6% and 5.5%, respectively. He has no price target for the stock.

Doug Anmuth of J.P. Morgan was similarly concerned about poor subscriber numbers and their effect on potential earnings. According to the analyst, all of Netflix's challenges might reduce revenue growth to approximately 10% in 2022, with pressures lasting far beyond 2023. Anmuth lowered the stock from Overweight to Neutral and reduced his price target by nearly 50% to $300 from $605.

Following Wednesday's results announcement, market opinion on the stock deteriorated dramatically. Only 33% of the 45 analysts covering the stock surveyed by FactSet ranked it Buy or Overweight, while 58% ranked it Hold, and 9% rated it Sell. By the end of March, 55% of analysts ranked the company as a Buy.

Piper Sandler also lowered the rating from Overweight to Neutral, reducing the target price to $293 from $562. According to analyst Thomas Champion, while password-sharing and ad-supported tiers "look intriguing," integration is probably more than two years away.

Even several analysts who maintained their Buy reviews were more skeptical about the stock. Guggenheim Partners analyst Michael Morris reduced his price target from $555 to $350.

"While management anticipates a 'creative excellence' and renewed revenue growth acceleration driven by new monetization over the next 18 months, we have significantly downgraded our membership and financial growth projections over the next decade, significantly lowering our target valuation," Morris stated on Wednesday.

"We continue to be bullish on Netflix given its strong, exclusive content portfolio and broader digital streaming expansion," he said in a research note. William Blair does not set a target price for Netflix.

On Friday, records were broken in the markets’ close as investors ignored a crucial inflation data released before this year's Federal Reserve's final policy meeting.

How do Liquidity Providers Make Money?