On Monday, financial markets in Europe plunged into the negative as oil prices surged over fears of a Russian attack on Ukraine.

The FTSE 100, which has strong exposure to energy and commodities sectors, sank 1.7% in London, while the CAC dropped 2.8% in Paris and the DAX declined 2.1% in Frankfurt.

Tourism and entertainment, as well as the banking industry, drove the indexes down.

It occurs as the Federal Reserve's James Bullard has urged for a more aggressive strategy to tighten monetary policies, stating that he wants to see 100 basis point rises by July.

"The big problem here is that inflation is considerably greater than we would have predicted half a year ago," he remarked, noting that interest rates may be raised without disrupting markets.

The conflict surrounding Russia and Ukraine rose even more over the weekends. The United States has warned that Russia might invade Ukraine within days, while British Prime Minister Boris Johnson will go to the EU this week to mobilize Western allies.

Based on the report, Brent oil was selling at as much as $96 per barrel before receding, its highest since September 2014, as investors fretted about interrupted supply in an already-stressed energy market. Throughout the day, West Texas Intermediate reached a fresh seven-year peak.

This week marks the ninth week in a row that oil prices have risen, with experts predicting that prices would surpass $100 per barrel by the end of the week. 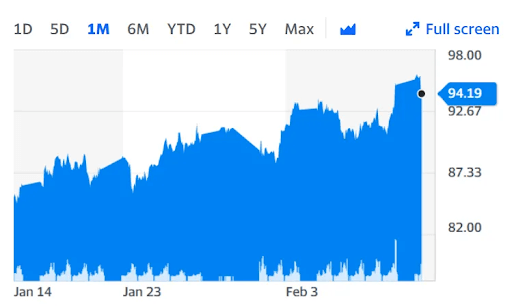 "Markets are bracing for the prospect of the European war, which adds to the complicated concerns that are causing unpredictability and instability in international markets right now," IG's Kyle Rodda remarked.

"United states reports on Friday predicted that Russia could invade Ukraine as early as this week — sooner than anticipated because it was assumed the Russians would refrain from making such a move before the end of the Beijing Olympics to appease the Chinese — with recent information implying that Wednesday may be the day of the invasion."

"Friday's move down in US stocks looked to correlate with statements by US National Security Advisor Jake Sullivan who encouraged all Americans in Ukraine to leave right away, and that a Russian attack might come at any time," Michael Hewson of CMC Markets commented.

"The US also told all US personnel in Ukraine to evacuate the region instantly in case hostilities erupted."

At the same time, the US dollar rose to a two-week peak as worried investors sought safe-haven assets. Following a recent gain with prospects of a robust economic rebound, the pound fell by half a cent to $1.351, while the euro fell by 0.3% to $1.132, its worst level in around a week.

"Should the market try to price in greater external shocks, the cable may easily break below the 1.3500-1.3600 zones that have held since the beginning of February," ING analysts warned.

"At the same time, we believe that the flow of information in the UK this week should actively support the Bank of England's tightening forecasts."

Overnight, Asian equity markets plummeted, with the Nikkei dropping more than 2.2% in Japan, the Hang Seng down 1.4%, and the Shanghai Composite down 1%.

On Monday, the Hang Seng China Enterprises Index fell 7.2%, the most since November 2008. The Hang Sang Technology Index fell 11%, the biggest drop since the index's inception in July 2020, wiping off $2.1 trillion in value from a year-ago high.

How Does the Cryptocurrency Exchange Business Work?

Unlike any other moment in contemporary history, the universal adoption of Bitcoin has been unparalleled. There has been a rapid growth in the number of firms that specialize in bitcoin.