PCE Inflation, Consumer Confidence: What To Know This Week

After stocks fell for the second week in a row last week, investors will be turning to a slew of new economic and earnings data as a trigger for a possible rebound.

Because the stock and bond markets in the United States will be closed on Monday in commemoration of Presidents Day, fresh data releases will be delayed to the end of the week. Updates on tensions in Russia and Ukraine will also be a focus this week, after markets fell to their lowest levels in a month on Friday, owing to fears over the intensifying crisis.

While the rising prospect of armed war has eclipsed many other market concerns, inflation has remained a key concern for investors. Inflation affects both the rate at which the Federal Reserve tightens monetary policy and the degree to which consumers cut back on spending and impede overall economic activities as a result of higher prices.

"I believe that most of the Russia-Ukraine instability happened in the energy sector, notably with regard to oil. The remainder of the volatility in the wider market, I believe, is related to the Federal Reserve's tightening discussion," Optimal Capital's director of strategy, Frances Stacy, said on Friday. "We're seeing this kind of aggressive tightening against the background of inflation, and I believe that's what's generating the instability."

The Bureau of Economic Analysis will issue its monthly personal consumption expenditures (PCE) deflator on Friday, providing new data on the amount of price hikes throughout the rebounding economy.

According to Bloomberg statistics, consensus analysts predict the PCE to grow by 0.6% in January, accelerating from December's 0.4% gain. This would be the 14th straight monthly improvement, bringing the index up by 6.0% year over year. This would be the fastest gain since 1982, and it would also be faster than the 5.8% annual increase recorded in December.

The core PCE index — the Federal Reserve's preferred measure of underlying inflation that excludes volatile food and energy costs — is also anticipated to have risen in comparison to December's index. Economists anticipate a 5.2% gain in core PCE in January, compared to a 4.9% increase in December.

Expectations for the current inflation report indicate that the economy has yet to reach its price-increase high. And, as supply chain concerns and virus-related interruptions linger, central bank officials are gradually coming around to the idea that inflation has been stickier than originally projected.

"Since the December meeting, I would say that the inflation situation has remained roughly the same, if not somewhat worse," Fed Chair Jerome Powell stated at the briefing in January. "I'd boost my own estimate of 2022 core PCE inflation... by a few tenths today."

Furthermore, the new PCE print is anticipated to confirm readings from other carefully followed inflation prints. The January Consumer Price Index (CPI) increased by 7.5% year on year, the biggest rise since 1982, outpacing the 7.0% increase in December. On the producer side, wholesale prices increased 9.7% year on year in January, just slightly less than the 9.8% rise recorded in December.

Despite rising price pressures, consumers have generally maintained their spending habits. Retail sales increased by 3.8% in January, topping expectations and recording the largest increase since March 2021.

And this constant spending has occurred despite the fact that consumers have increasingly mentioned inflation as a major issue for their own personal budgets. Average hourly salaries have risen in recent months as well, but have yet to keep pace with inflation.

"The resilience of spending stands in stark contrast to the slump in consumer confidence, with households increasing their purchases of big ticket items while simultaneously reporting that now is a particularly bad time to make those purchases," Paul Ashworth, Capital Economics' chief North American economist, pointed out. "The core reason for consumer anxiety is the rise in inflation. Confidence could recover once inflation returns later this year, but the present weakness serves as a warning that real spending growth will be subdued this year." 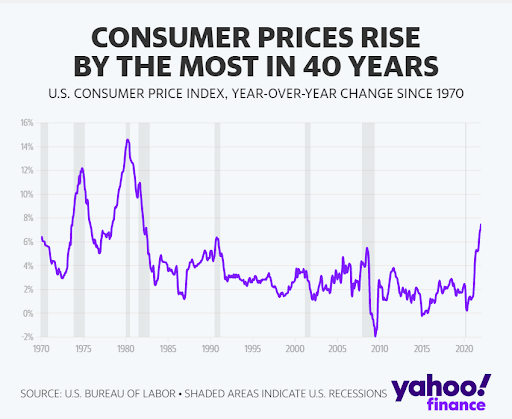 The Conference Board's Consumer Confidence Index, which is set to be released on Tuesday, will give a timely view of consumer sentiment in the aftermath of the recent price increase at the start of the year. Economists expect the index to decline to 110.0 in February, the lowest level since September 2021, when the Delta strain impacted on consumers' expectations. In January, the consumer confidence index was at 113.8.

This week, investors will also get a number of fresh earnings reports, with large retailers including Home Depot, Lowe's, Macy's, and The TJX Cos. reporting alongside other heavily watched stocks like Coinbase, Wayfair, and Nikola.

So far this earnings season, corporate profits have remained strong, but at a slower pace than in previous quarters. According to FactSet, 84% of S&P 500 businesses have disclosed real fourth-quarter financial reports as of Friday. In addition, the expected profits growth rate for S&P 500 businesses in aggregate was 30.9%, down from above 40% in the third quarter.

However, although many firms' results for the last three months of 2021 have been encouraging, outlooks have worsened, indicating persisting supply chain instability, increasing pricing, and other macroeconomic fears. According to FactSet, 72% of firms that made earnings conference calls between December 15 and February 17 cited "inflation."

FactSet's John Butters commented on Friday, that in terms of earnings guidance from businesses, 71% of the S&P 500 firms (55 out of 77) who have released EPS (earnings per share) forecasts for Q1 2022 have issued negative guidance. “This is the biggest proportion of S&P 500 businesses offering negative guidance since the third quarter of 2019 (73%)."

"As a result, the market may be responding more to negative earnings guidance and downward estimate revisions for the first quarter of 2022 than profit surprises disclosed during the fourth quarter of 2021," Butters noted.

Ether Is Struggling As Its Network Hits A Setback

Developers also intend to develop "shards" of the blockchain to support a broader range of transactions with greater throughput. These could help Ethereum scale up and minimize the high transaction fees that infrastructure managers are now charged.

What is Prime of Prime Liquidity?

Let's find out why can’t brokers function without liquidity aggregation, what are the types of liquidity providers and what is Prime of Prime liquidity.